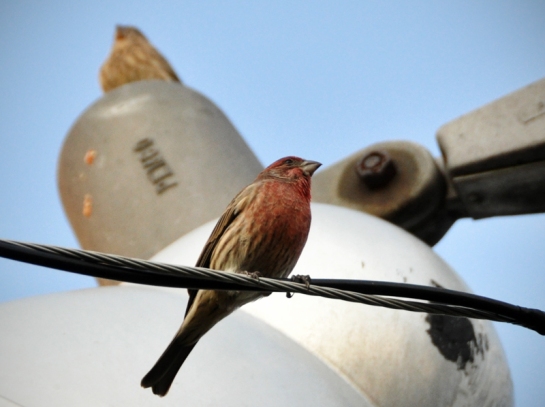 The streets were all shade but the late afternoon light filled the treetops and sparked the crosses atop the steeples at St. Jerome and Mater Dolorosa. All the sounds of approaching evening in Holyoke were there, too: the buses, the Pentecostal church band rehearsing in the building next door, and bird songs.

I shot the photo above at 5:25 p.m. outside Czelusniak Funeral Home near the corner of Hampden and Maple streets. I had to look this bird up; at first I thought it was a Purple Finch, but after reading Cornell’s comparison of Purple, Cassin’s and House Finches I’m leaning toward the latter. Purple Finches have a “deeply notched” tail while House Finches sport a tail that’s only “slightly” notched. That notch looks slight to me.

I walked through Pulaski Park next, from the American Legion Post down to the spray park. Two kids with a football were running passing patterns next to the basketball court.

It’s hard to say what they were thinking as I walked in circles under a honey locust tree, putting a cramp in my neck as I tried to get a clear shot of a Downy Woodpecker way up in the branches. The bird was tapping away at the tree’s banana-shaped seed pods, offering its distinctive “pik” call every so often. It was approaching 6 p.m. Click the photo to enlarge, for what it’s worth.

Soon a Mockingbird burst into song in a nearby tree, and I followed it over to Lyman Street. It sat on a strand of barbed wire outside Taft Power Equipment as a group of gulls flew high overhead.

I shot the photo at right from the opposite side of the street. After getting a “safety” shot I crossed, lined up a good closeup shot and watched as the bird disappeared just as I pressed the shutter.

My route home took me by Open Square, where I saw two Red-tailed Hawks. I’ll have a gallery from that sighting in my next post.