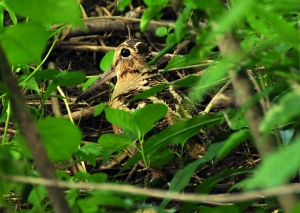 I was driving along a dirt road near the Oxbow back in June when I saw what I thought was — well, I actually didn’t have any idea what I thought it was. It was standing at the side of the road, in deep shade, and I only caught it out of the corner of my eye. I kept driving, thinking it was a chicken. But something seemed wrong about that chicken.

I found a place to turn around and went back to investigate.

Soon, I was scratching my head while I looked at a bird that looked like it had been assembled from parts of other birds. It was shy — I was only able to pop a few frames, at a distance, before it disappeared into the underbrush.

I tend not to venture out specifically in the hope of spotting a new-to-me species, but a sighting that has me running home to check the Cornell Lab’s “All About Birds” for help with an ID is always fun.

I never get tired of seeing hawks. On my recent trip to California it seemed like there was a red-tail perched on every third telephone pole along one stretch of Route 1, and I still managed to get a little giddy for every single one.

The birds I took for granted when I was a kid now totally intrigue me. They used to seem too drab, too medium-sized, too common. But when I started looking at them — really looking at them — I finally realized just how complex and vivid their color palette is. And then there are the murmurations, the magic of watching the patterns they weave in flight.

When I moved into my apartment there was an old television antenna right outside one of my living room windows, on the roof of the building next door. The antenna was gathering place for starlings, but it fell victim to high winds last January. I still miss walking by the window and taking a peek at the shapes they were making against the sky. 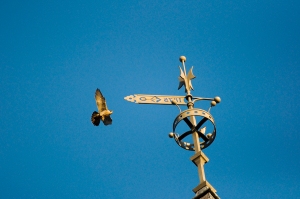 I’d just started getting used to the idea that eagles had become a regular sight in downtown Holyoke when I realized that a pair of peregrine falcons are regular visitors to City Hall. Falcons were kind of the gateway bird for me, and I filled a lot of sketchbooks as a kid with falcon after falcon after falcon. But I only drew them from my bird guides — I never really thought I’d see them in the wild. And, even as I got older and realized they were living in Sunderland and Amherst and even Springfield, I never really thought I’d see them — and see them so regularly — in downtown Holyoke.

But now here I am, and here they are.

In general, my pick here is “downtown Holyoke” — the canals, Heritage State Park, the upper deck of the parking garage — but one area stands out.

The old paper mills that run along Water Street are really on the outskirts of the downtown area, the last thing between the Flats neighborhood and the river. The atmosphere, when you walk the path that runs behind them, is an odd mix of urban, industrial and wild. It’s half creepy and all beautiful.

And there’s a fascinating mix of birds here. I’ve seen eagles, hawks, falcons, orioles, woodpeckers, juncos and several species of sparrows. At dusk, the mills are right in the flight path of the crows as they head toward their roosts in Springfield. Because of the proximity to the river, ducks, geese and gulls are regulars, too.

If you’re a fan of both birds and 19th-century industrial architecture, this spot is tough to beat.