It was snowing during my drive to the office yesterday morning, so I stopped at Court Square in Springfield to shoot a few photos of people with umbrellas hustling through the fat flakes. The red-tailed hawk I spotted seemed to favor the cupola on the roof of one of Court Square’s historic and long-vacant buildings. It would leap from the flagpole, trace a few circles around the steeple of the Old First Church, and then return to its perch. 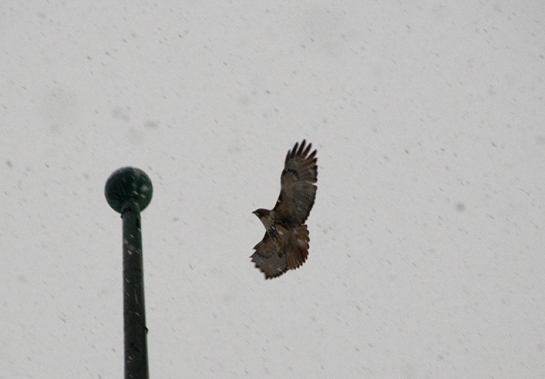 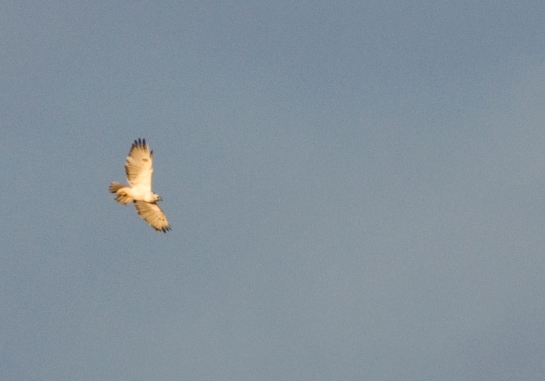 A few months ago I was driving north on I-391 in Chicopee when a white bird burst from the forest on the right of the road and flew across the highway in front of my truck.

I was stunned: at first I thought it was a seagull, but its broad wings made me think it might be a snowy owl from that irruption we’ve been hearing about.

A few weeks later I was out on the bridge below the Holyoke Dam watching one of the eagles when a woman pulled her car over and got out to talk to me. She was a birder, too — a big fan of the eagle population along the Connecticut River corridor. As we chatted, the conversation turned toward the red-tailed hawks that reside along I-391 between Springfield and Holyoke. That’s when she asked me if I’d seen the albino. 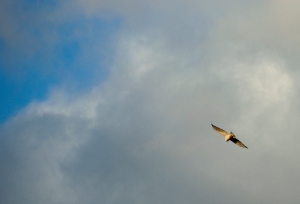 The white hawk, she said, had hatched in the last year or two and she’d spotted it several times in Chicopee. I resolved to keep an eye out for it.

Today, driving north on 391 in the late afternoon, I spotted a white bird soaring high over the road. At first, again, I thought it was a seagull: I happened to catch a moment in its path when its wings looked more pointy than round-ish and broad (see the picture at right). I pulled into the breakdown lane, put on my hazard lights and shot what I could through my windshield.

The bird is nearly pure white — the only color on its body and back was the red-brown low-angle light of the sun. It had traces of faint red on the underside of its tail, and dark markings along its outer wing feathers.

I only had a 200mm lens with me, so the photos I’ve posted have been severely cropped. The photos are also high-resolution, so you can click to enlarge and then zoom.

A Common Merganser on the Connecticut River Monday afternoon. 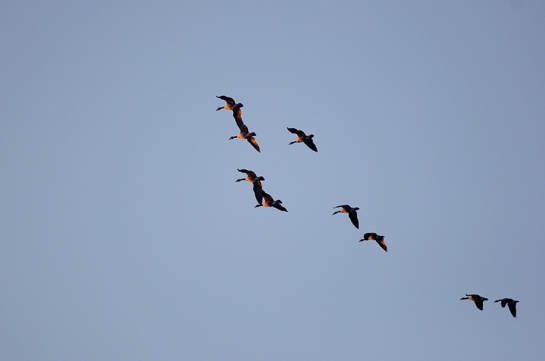 I'm still seeing a fair number of Canada Geese below the dam in the late afternoons. 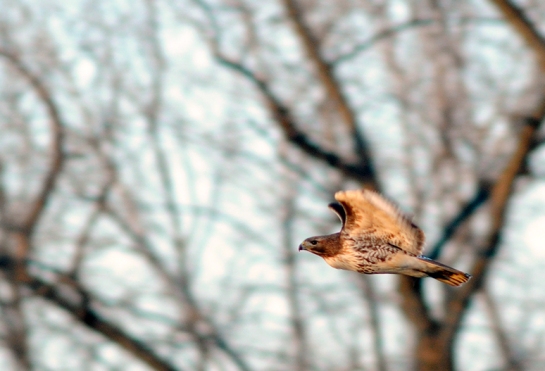 This Red-tailed Hawk showed up accompanied by a very large juvenile. I only managed decent shots of the adult, though.

The adult hawk sat in a tree in the middle of the river until just after sundown.

Two owls were calling to each other late Sunday afternoon at Holyoke’s Ashley Reservoir, but I couldn’t spot them.

When I reached the place where I thought the calls were coming from there was only silence. Then, far off, one owl called again.

“Maybe that’s the sound of an owl laughing,” said a woman out for a walk.

One thing you can almost always count on seeing at Ashley, though, are Canada Geese, and a pair flew overhead just as the sun was heading for the horizon.

A juvenile hawk sits in a tree in Lyman Terrace on Saturday, Feb. 11.

A clutch of pigeons burst into flight and I turned in time to see the hawk gliding above the roof of the Dwight Street parking garage.

It settled in a tree in Lyman Terrace.

I shot a few photos from my perch on the garage before heading down to the streets.

The bird — a juvenile Cooper’s Hawk, I think — had chosen a branch way up in a tree near the bottom of Hampden Street. I walked around the trunk looking for a clear shot through the tangle of limbs.

Three kids who were playing in the courtyard outside an apartment took interest.

“Is the hawk up there?” one kid asked.

I pointed the raptor out to them and they fanned out around the base of the tree, offering recommendations for the best viewing angles.

“I’ve never seen anyone down here just to look at birds,” the kid said.

I told him that I lived right up the hill, and that I saw a lot of interesting birds in our neighborhood. But as I showed the kids close-ups of the hawk on my camera’s LCD screen, I didn’t know that within the week we’d learn how much our neighborhood’s landscape might soon change. 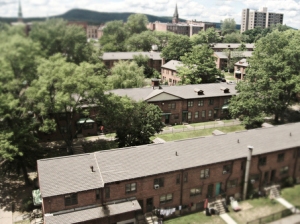 A view of Lyman Terrace from Front Street, 2008.

In early March the city will ask the Boston office of the U.S. Department of Housing and Urban Development to approve a plan to demolish Lyman Terrace.

The plan involves removing all of the buildings and issuing a request for proposals that will allow the city to sell the land to a developer.

A Holyoke Housing Authority document dated Feb. 17, 2012 serves as a “notice of intent” to request approval for the demolition plan, and it relays the findings of an environmental review performed on behalf of the authority as a prelude to the request. The document appeared on the authority’s website this week.

In a section under the subhead “Plain English Explanation,” the authority offers a blunt assessment of the worth of Lyman Terrace in the city at large: “The environmental review (study) looked at the [demolition] project’s effect on people and the community and determined that the project will have no significant impact.”

Demolition would mean the end of a long and sometimes troubled history for the development, which offers federally assisted public housing for families.

The 167 units of Lyman Terrace were built in 1939 and opened to tenants in 1940, two years after the creation of the Holyoke Housing Authority. It is the city’s oldest public housing property — also one of the oldest in the country — and also its most centrally located. As the authority’s website mentions, the units are within walking distance of High Street’s stores, banks and shops; the Holyoke Health Center; the new intermodal transportation center; and family entertainment such as the Children’s Museum and the Merry-Go-Round.

On Oliver Street a satellite unit of the local Boys and Girls Club chapter operates out of one of the complex’s 18 buildings. The 5.5 acres also encompass a community garden — a collaboration between Nuestra Raices, the Boys and Girls Club and the housing authority — where residents grow vegetables and flowers. Bright murals bearing words like “community” decorate the corners of some buildings.

While the population is now largely Latino, the city’s public housing projects were segregated until 1958 — and even as of 1964 Lyman Terrace was barely integrated. A 1966 report to the United States Council on Civil Rights offered the following demographic breakdown of the development’s households: 158 white, 5 Puerto Rican, 4 black.

The development’s age lends an air of historic value to the property, but age can be a tenuous asset. Even if they were well-maintained, the units are cramped by modern standards. The Feb. 17 notice cites the state of the development’s infrastructure in its decision to move forward with the demolition process: “The Holyoke Housing Authority has further determined that the Lyman Terrace Housing Complex is obsolete as to its physical condition and that no reasonable program for modification is cost effective to return the public housing complex to a long-term useful life.”

In 2005 a plan for major renovations to Lyman Terrace that would have reduced its density to 100 units was postponed, and the complex instead saw an influx of federal funding from the Department of Justice via its “Weed and Seed” program.

The program — a comprehensive approach that sought to drive crime from the area while bringing in human service agencies — paid for dedicated police patrols. On a July evening in 2007, patrol officer Wilfredo Guzman was on his beat in Lyman Terrace, sitting in a cruiser in an alley near Hampden Street. In what police and court documents would later call an unprovoked attack, a resident suffering from mental illness approached the car and struck Guzman in the face with a hammer. Badly injured, Guzman hit the gas, accelerated across Hampden Street and crashed into a four-apartment building.

Nearly 5 years later, the unit is still boarded up — the plywood a sign, perhaps, of the limbo that Lyman Terrace has lived in for some time.

For several years the city pinned its hopes for Lyman Terrace on the award of another Hope VI grant, the HUD program that in the late 1990s transformed a section of the city’s Churchill neighborhood into a lower-density, mixed income development. The grant would have brought funding to repair or replace buildings in Lyman Terrace, but each application cycle ended with Holyoke absent from the list of winning proposals.

Holyoke made its last pitch for Hope VI funding in November 2010 in a proposal that called for replacing the current barracks-style buildings with primarily single-family and duplex units featuring patios and off-street parking. In its current state, the proposal read, Lyman Terrace “[…] stymies investment in the surrounding neighborhood, is crime ridden, lacks 504 and ADA access and is in great need of a total transformation.”

Had the application been successful, the transformation would have drawn from a pool of $124 million in HUD grant funding.

Instead, under the Feb. 17 plan, the city will spend $1.6 million — $700,000 from the Housing Authority’s operating budget, and another $860,000 in capital funding provided through HUD — to erase Lyman Terrace from the downtown landscape.

Sometimes it’s hard to imagine that the world of the kids growing up in Lyman Terrace is anything like the world of my childhood.

On a June afternoon a few years ago, I was standing on the top deck of the parking garage shooting photos of the brick row houses. A group of shirtless kids chased each other with squirt guns outside the apartments that open to West Court.

At the sound of real gunfire — three shots in all — one kid threw open a screen door, ushered the others inside, and slammed it behind him as he dove for cover.

This is a vastly different experience from growing up in suburban South Hadley, where playing outside didn’t carry the risk of being caught in a crossfire and where there was little likelihood that a government agency would decide to tear down your house.

But kids will be kids, and kids anywhere hold certain interests in common.

“I want to be a falcon,” the talkative kid said as we looked at the hawk last Saturday. His eyes lit up when I told him that a pair of falcons live in the tower at City Hall, right around the corner from his apartment. He kept peppering me with his observations: “One time I saw an owl here. And then a guy came to my school with a bunch of birds, and he showed us the same kind of owl!”

If HUD approves the city’s plan, Lyman Terrace will soon be another patch of open space awaiting a developer. Some things won’t necessarily change: over the new vacant lot the starlings will still fly in tight formations and the falcons will still dive-bomb pigeons and the hawks will still wait for squirrels to drop their guard.

The birds will carry on, but a few hundred fewer people will be there to appreciate their routines.

View this document on Scribd

I was in Boston last Saturday for a newspaper awards dinner, and arrived just early enough for a quick stroll around a corner of the Boston Common.

I’d brought my camera just in case — and was glad I had it when I almost immediately spotted two red-tailed hawks soaring over Boylston Street. I lost sight of one, but the other perched high atop a flagpole on Tremont Street. 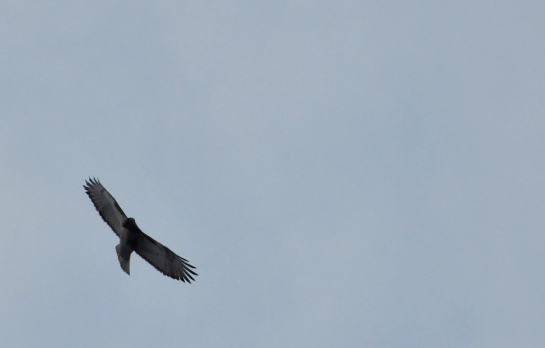 Canada geese have been gathering in the evenings on the Connecticut River below the Holyoke Dam.

Here are a few shots I took this afternoon (click to enlarge). 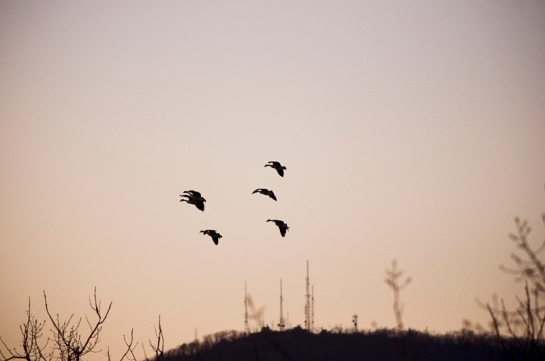 The Birds Downtown
Blog at WordPress.com.