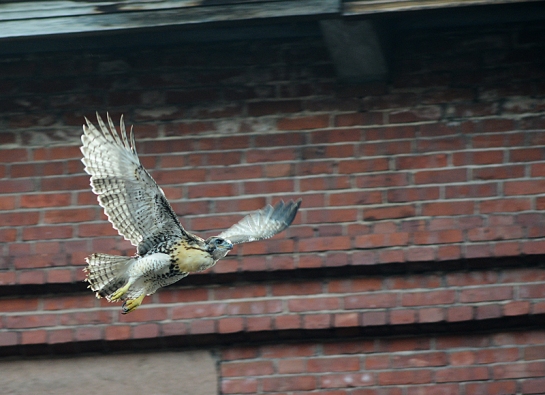 One of the fledgling Red-tailed Hawks from the Race Street nest has been spending its time on the roof at Open Square. I spotted it there Tuesday evening, early yesterday morning, and again this morning.

Each time the two adults — the original male and the new female — have been close by. The female seems to prefer to perch on the smoke stack at Open Square, while the male has a favorite window ledge near the top of a building on Front Street.

I found the male first this morning and could tell where he was before I could even see him. There’s a metal rail along a brick wall at Open Square where he also likes to perch, and next to the rail there are a few trees. I saw a rustling among the leaves — branches thrashing around — and knew the hawk was there, grabbing a switch of green leaves.

Moments later the hawk emerged with a small branch and bundle of leaves in its beak. It flew to another perch on the mill, dropped the switch, and then circled around to join the fledgling on the roof.

The adult male fed while the fledgling stood by. Soon it stepped toward the edge of the roof and peered over. It backed up, took a little running start, jumped and took flight. It soared over the building, turned over the canal and landed next to the adult male, where the pair was soon joined by the female hawk.

I haven’t seen the second fledgling since Monday. The fledging period is one of the most dangerous times for a young hawk, especially in a city. They don’t yet have the street smarts to stay away from people and cars and often end up perching in places where they’re exposed to danger.

We should be able to watch the young hawks for the next month or two as they start spending more time in the air and learn how to hunt. By mid- to late-July, they’ll strike out on their own and establish a new territory.

Whether the adult male will stick around is up in the air, too, but it seems likely that he may re-nest at the Race Street site with the new female. The hawks at Washington Square in Manhattan provide a good case study: when the female half of the pair died in December 2011, the male found a new mate and hatched a brood at the same nest this spring.