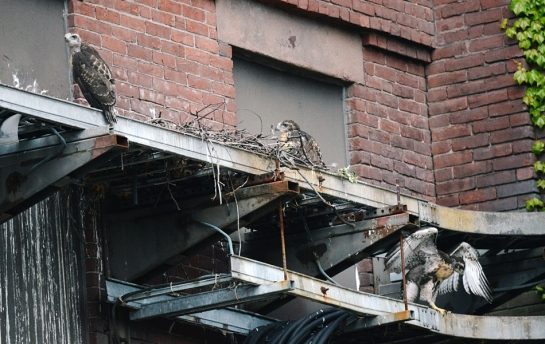 UPDATE, Friday morning: Some time between dusk last night and dawn this morning, the wayward hawk found its way back up to the nest.

A check on the Red-tailed Hawk nest this afternoon found some drama: one of the young hawks found its way to the lower level of the nest platform and couldn’t figure out how to get back “upstairs”.

I watched for about two-and-a-half hours, and when I left as it started to get dark the little one was still separated from its siblings. The adult hawks know it’s down there — the mother checked on it several times — but it also missed two feedings during the time I watched.

The stray little hawk seems reachable in terms of the adults delivering food, but the spot it’s in doesn’t allow for the jump-flapping exercise necessary to keep building the strength for fledging.

Of course, if the hawk is already strong enough, fledging may just be the next logical step — and the only step out of this predicament. 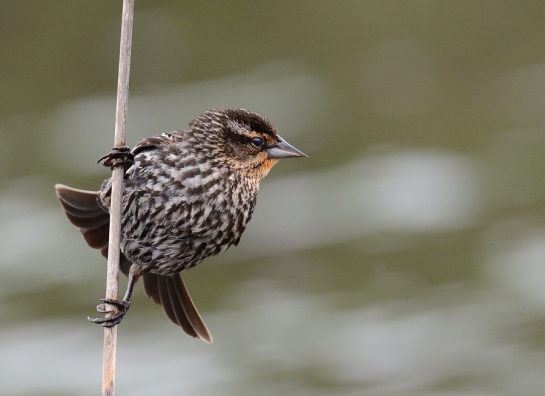 But then, driving along the canal in the city’s South Holyoke neighborhood, I saw a male perched on a chain link fence. I pulled over, hoping to snap a photo. The bird flew away. And then it started to rain.

Several more males landed on utility wires overhead. When they flew away, they flew down toward the canal, out of sight over the steep bank. When the rain died down, I scurried under a fence to see where they were going.

At the water’s edge was a band of reeds and cattails, and two female Red-winged Blackbirds were busy snatching insects and tending to their well-camoflaged nests.

Some of the photos below may make this spot look like a bucolic marsh, but looks are deceiving. Across the canal is a row of factories. Back up the bank and across the street is a tire store.

It’s a world inside a world, and it’s one I’m glad to have discovered.

Here’s a slideshow of photos from the outing:

Last weekend marked MassAudubon’s 30th-annual ‘Bird-a-thon‘ fundraiser. The idea: log as many species as possible within a 24-hour period. The event runs from 6 p.m. Friday through 6 p.m. Saturday.

I set a goal of logging 50 species within walking distance of Holyoke’s downtown neighborhoods. Friday evening and Saturday morning were promising — but despite the good weather, new sightings slowed down Saturday afternoon. My little team, which also included Holyoke resident and fellow blogger Sonia Barrera, ended up logging a total of 45 species. Not bad, considering most of the habitat we surveyed included urban parks and industrial tracts.

A few highlights included my first-ever Yellow Warblers in Holyoke; a Killdeer (also a Holyoke first for me) that landed near my feet by an electrical substation on Water Street; a Ruby-throated Hummingbird that paid a visit as dozens of shad fishermen tended to their hobby nearby; and an Eastern Kingbird, seen at a distance, that briefly confounded us until Sonia nailed the ID.

In addition to a multitude of Yellow Warblers, we spotted a Black-and-white Warbler, a few Yellow-rumped Warblers and an American Redstart. There were a number of Warbling Vireos out, too, as well as a male and female Baltimore Oriole out behind the paper mills near the river.

Missing from the list were the woodpeckers (mostly Downy and Red-bellied) that I often see, as well as the Belted Kingfisher that’s almost always a sure bet out near the river.

While we didn’t hit my 50-species goal, sticking so close to home reinforced the idea that you don’t have to go anywhere fancy to see really interesting birds. At one point, a Yellow Warbler perched on a utility line right by Water Street. Any kid living in the Flats could see that bird, and that’s awesome.

Below, a slideshow of photos I shot during our time in the field. I’ll post the full list in the days ahead. 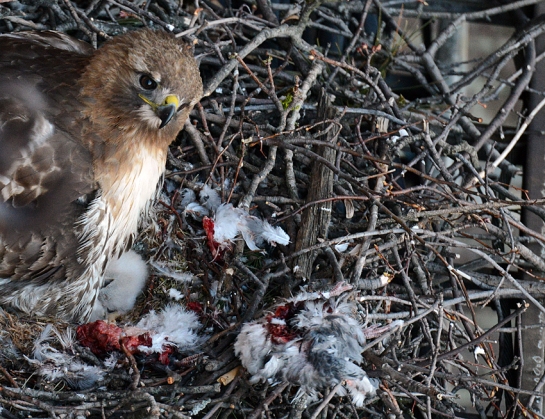 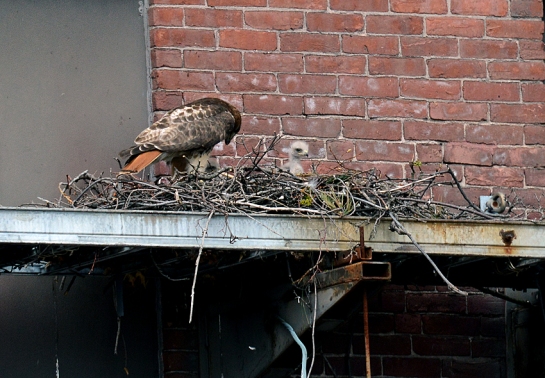 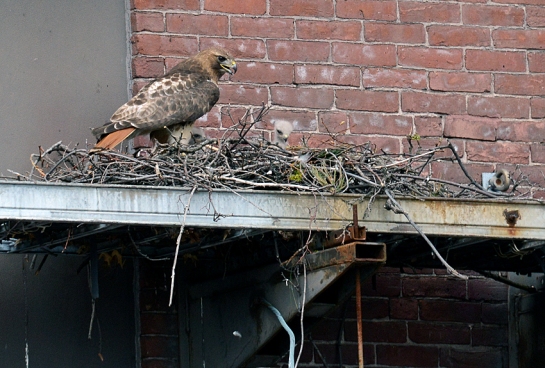 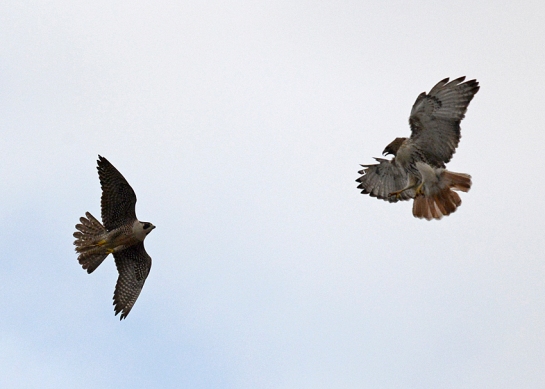 After wondering on Sunday whether Holyoke had habitat suitable for Savannah Sparrows, I was able to answer my own question pretty quickly.

I found about 6 Savannahs in Pulaski Park yesterday, near the canal: 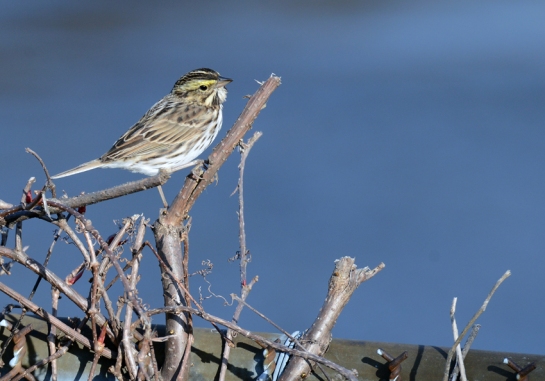 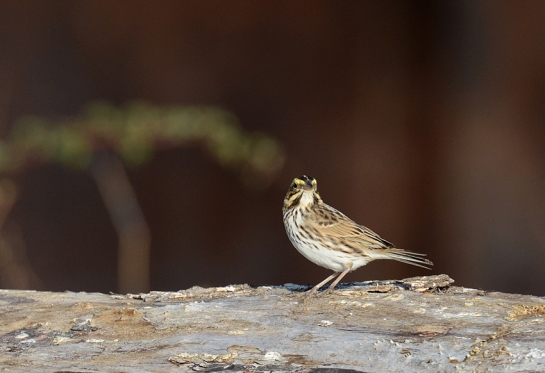 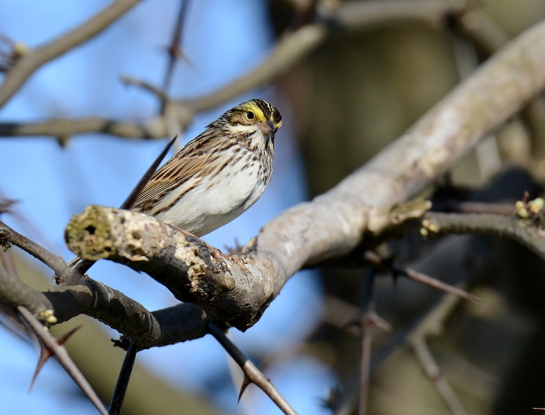 There was also a Chipping Sparrow hanging around: 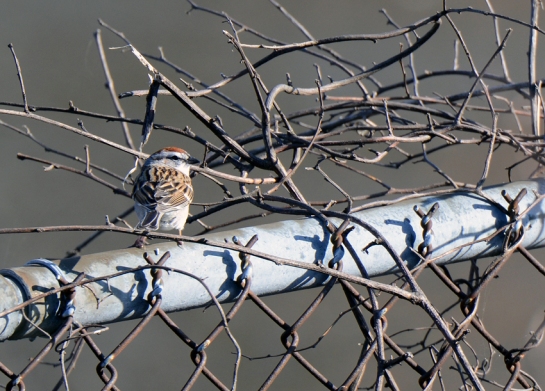 It’s shaping up to be a very interesting spring here in the city. 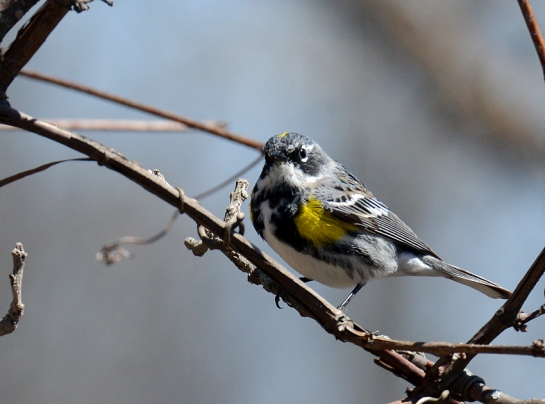 While I do most of my birding in the heart of Holyoke, I find it helpful to take regular trips to more traditional birding hotspots around the Pioneer Valley. Checking in at places like Arcadia, where the bird populations tend to be a bit more robust and varied, helps me keep tabs on when migratory …

END_OF_DOCUMENT_TOKEN_TO_BE_REPLACED 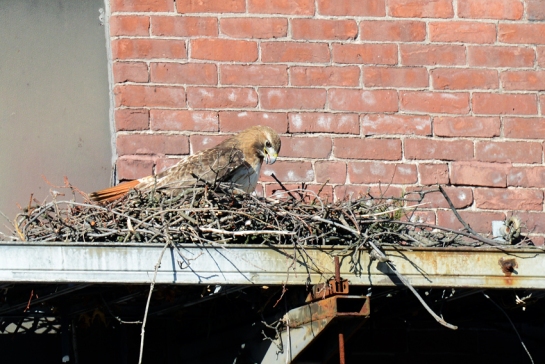 Back in March, I predicted that we’d see chicks hatch at the Red-tailed Hawk nest downtown between April 11 and 18.

As we near the end of that window, I checked on the site this afternoon. The hawk on the nest was alternating between the usual hunkered-down position and the sort of half-squat shown above, often holding its wings partially open.

I didn’t observe any feeding behavior to indicate that newborn chicks were already in the nest, but the hawk on the nest frequently looked down between its feet. Was it rolling the eggs, or watching a tiny hawk chipping away at its shell? We should know soon.

One thing that occurred to me today was both this year and last year the hawks built their nest right up against brick walls that get direct afternoon sunlight. I started to wonder if that’s a deliberate choice, as the nest would receive a few hours of reflected warmth each day, giving the eggs a little boost before temperatures drop off at night.

On some days birding in Holyoke feels like catching up with old friends.

The Canada geese are back at the nest they chose last year, and it looks like they have eggs. I believe the eggs were laid this week — I’ve been checking the site regularly, and this morning was the first time I saw one of them actually sitting on the nest: 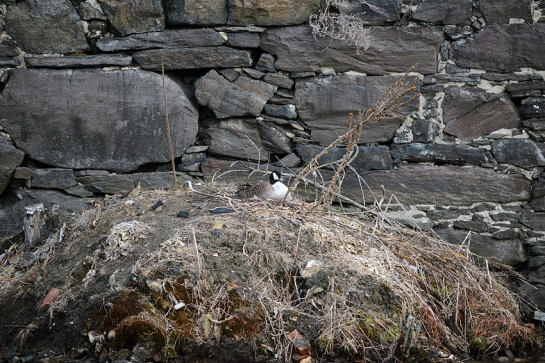 A Mallard paddled in the canal nearby, drawing the ire of the male goose when it got a little too close to the nest: 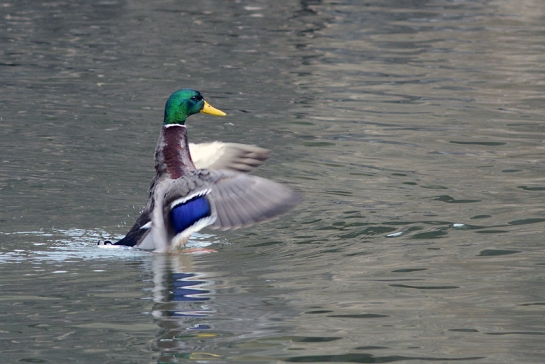 The Eastern phoebe is still hanging around in Heritage State Park: 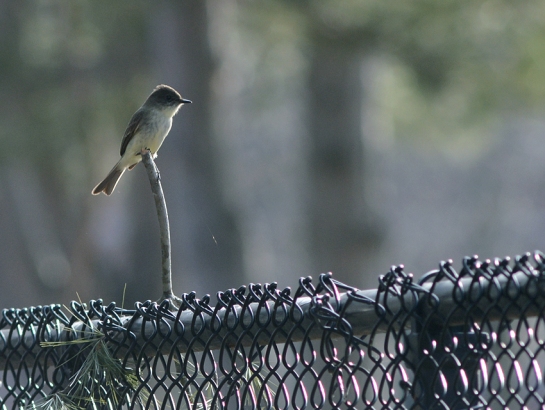 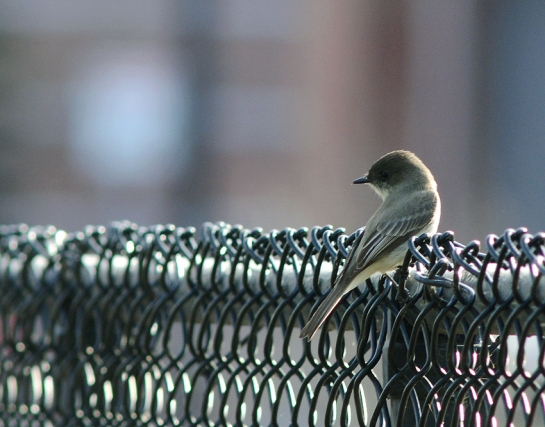 And, it may only be a week or so before we see this year’s brood of Red-tailed Hawks. I caught the adults switching off incubating duties this afternoon: 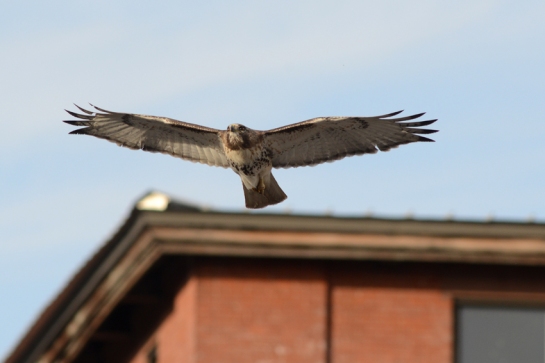 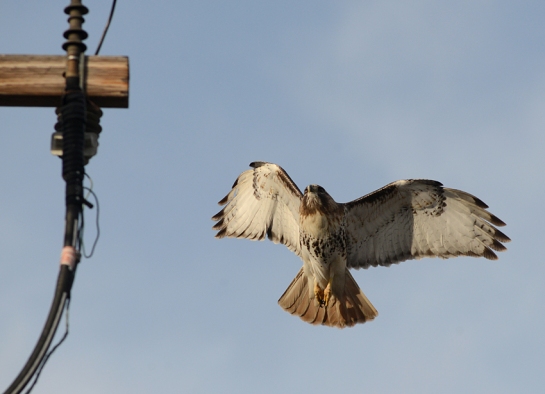 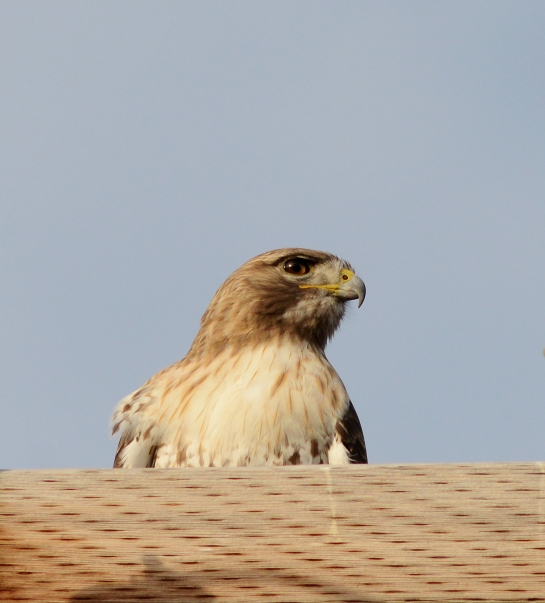 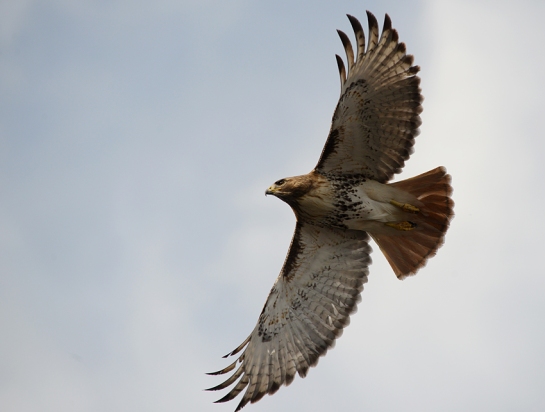 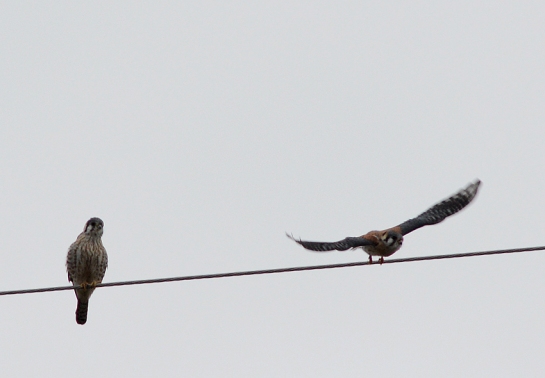 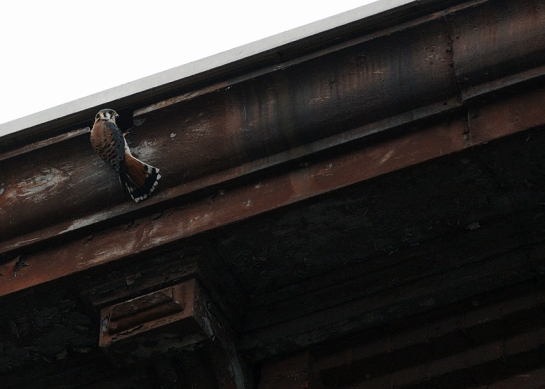 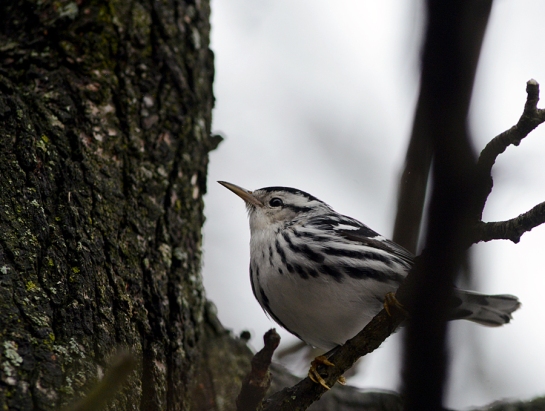 After I posted about the Pine Grosbeaks in Heritage State Park last Sunday, a local birder visited the park to look for them. While there, he found — to his surprise — a Black-and-white Warbler. He reported the sighting on a Facebook group devoted to birding in western Massachusetts.

After a week in which I managed a scant 10 minutes of birding while waiting for a city employee to copy some documents for me at Holyoke City Hall, I finally got out this afternoon.

I spotted the warbler within just a few minutes leaving my apartment. It was in a small row of trees bordering a walkway between the parking deck at City Hall and Holyoke District Court.

From there, I watched as the bird visited a number of trees in the parking, mingling with Juncos and at one point foraging just a few limbs away from a juvenile Cooper’s Hawk.

I’d gathered that Black-and-white Warblers were not an extremely common sight in Massachusetts in January. The Cornell Lab of Ornithology’s range map for the species shows the bird wintering no further north than the coast of South Carolina, with most of its winter range covering Florida, Mexico, Central America and parts of South America.

But just how uncommon is a sighting in Holyoke at this time of year? 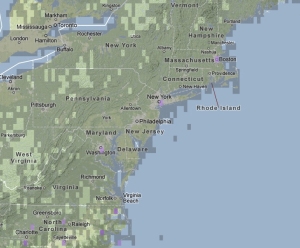 A map of data from eBird, at right, shows Black-and-white Warbler sightings reported during the month of January for the years 2009-2013.

From Virginia north into Canada, sightings have only been reported in Boston and the New York City and Washington, D.C. areas in January for the 2009-2013 span.

January sightings of the species, a ‘notable’ bird in eBird’s database, don’t pick up until well into South Carolina.

No western Massachusetts sightings are recorded in this data set.

That, of course, doesn’t mean that other people haven’t seen them, or that the birds haven’t been here. It only means they haven’t been reported through the eBird system.

Still, coupling the eBird data with the warbler’s range map suggests that seeing one in downtown Holyoke at this time of year is a rare treat.

Below, more photos from this afternoon.

The Birds Downtown
Blog at WordPress.com.